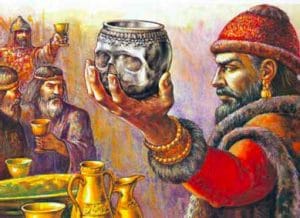 The paper, titled “Khan Krum and the Change of Bulgarian Grand Strategy at the Turn of the 9th century,” uses the theoretical framework of grand strategy scholars like Edward Luttwak and Inis Claude to analyze the shifts in the international environment and policy that the Bulgarian Khan Krum initiated at the start of the 9th century. The main reason for the creation of this work was the general lack of studies concerning the grand strategy of the First Bulgarian Empire despite the presence of numerous work on Bulgarian military, economic, and religious policy. By analyzing some of these works and by turning to primary sources, we can uncover the reasons and effects of the balancing activities initiated by Khan Krum. These were part of a general grand strategy of enshrining a balance of power in the Balkans to guarantee the survival of Bulgaria in the face of ongoing Byzantine counterattacks in the course of the 8th and 9th centuries.

In part one, I examine the grand strategy of the newly created Bulgarian Khanate during the end of the 7th and the 8th century. The initially successful preclusive defense of Asparukh and Tervel was abandoned due to the crisis of the 7th century. Instead, the Bulgarian khans were forced to defend their lands in depth, with the numerous campaigns of Emperor Constantine V coming close to the destruction of the Bulgarian Khanate. This made the Bulgarian khans understand the need for optimizing resource extraction and for adopting a new grand strategy.

Part two analyzes the historical narrative of Khan Krum’s military campaigns through the prism of grand strategy, showing the considerations that would have led to Krum’s expansion into the Carpathian Basin and later into the Byzantine heartland. The third section presents the internal and external balancing activities that came to define the grand strategy of the Bulgarian Khanate for the remainder of the 9th century. The final section then provides an appraisal of the effectiveness of this grand strategy in achieving the goals of the Bulgarian state, as well as the conclusion of the paper. I hope to later use this paper as the basis of a larger work (dissertation, book) on the grand strategy of the First Bulgarian Empire.

I wrote this essay during my sophomore year at Princeton University for my course in “Grand Strategy.” In this course, we analyzed different grand strategies that political entities adopted through the centuries, the reasons for their creation, and their ultimate success or failure at achieving the goals that the states wanted to accomplish. To do this, we studied thinkers like John Ikenberry, Aaron Friedberg, Edward Luttwak, and many others. This is the essay that I consider the best among those written during my sophomore year at Princeton.