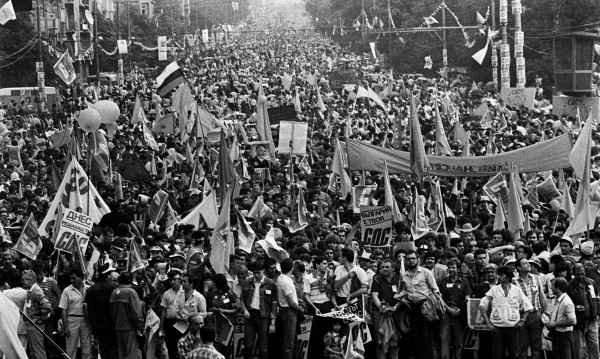 This essay is titled “Romania and Bulgaria: empirical studies on the effectiveness of nonviolent action.” In this essay, I look at Erica Chenoweth and Maria J. Stephan’s argument that nonviolent action is more successful than violence when it comes to protest movements. My main motive is that context may be an important indicator of whether and which movements ultimately prove successful. That is why I try to provide an empirical analysis to their statistics by using two real-life movements with extremely similar contexts, if not equal – the movements against communism in Bulgaria and Romania, which have not been chosen by the two scholars despite their similar contexts. While there have been analyses on the process of democratization in both countries, there has not been a comparison between them through the lenses of effective protest action. My thesis is the following sentence: “These two similar cases demonstrate that nonviolent resistance is more effective than violent action”.

I employ a plethora of sources – first-person accounts of the events, interviews with leaders on both sides of the political spectrum – democrats and communists, studies on the democratization of societies in Eastern Europe, as well as political and social analyses of the changes. These enabled me to gain in-depth insight into the topic, as well as allow me to compare the different approaches of both countries in achieving the same goal – democratization. By consulting the different theories, I was able to position myself clearly in the argument by bringing a study from outside the debate and analyzing the debate through the lens of that particular source. However, 12 pages is a very small limit and I hope to subject a future revision to a more thorough analysis of both. Specifically, I would like to examine more sources and attempt to compare more lenses and theoretical viewpoints, which, of course, would redefine my own views on the topic.

My key points are democratization, success, violence, nonviolence, and consolidation. I have provided definitions for all of them except violence and nonviolence, which, however, are self-explanatory. I believe my strongest point is my analysis of the legitimization of violence in Romania and its zealous refusal in Bulgaria. On the other hand, I am not sure whether I have thoroughly analyzed my point on the ability of violence to raise ethnic tensions, which can jeopardize the development of democracy.

I wrote this essay during my first semester at Princeton University for my writing seminar, called “The fight over nonviolence.” In this course, we analyzed nonviolent action and its effectiveness in bringing about political change. To do this, we studied thinkers like Mohandas Gandhi, Frantz Fanon, and Gene Sharp. This is the essay that I consider the best among those written for my writing seminar.